Haag Research & Testing recently published an intriguing study in the International Institute of Building Enclosure Consultants (IIBEC)’s Interface Magazine– Effects of Hail-Caused Dents on the Thermal Performance of Insulation Under Single-Ply Roofing. This article examined whether, and by how much, hail dents would affect the R-value of a roof’s insulation. Could a property owner see a noticeable difference in their energy bills due to changes in insulation? 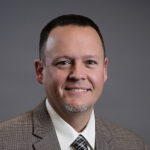 Steven R. Smith is a Forensic Engineer with Haag Engineering Co., and the Director of Research & Testing. Mr. Smith is an experienced forensic engineer who began his career with Haag more than 24 years ago. He spent seven years working as a Senior Lab Technician while earning a Bachelor of Science in Mechanical Engineering degree from The University of Texas at Arlington. He has been involved with the lab throughout his career, and has been able to leverage his extensive and practical engineering field experience with research and testing projects.

Mr. Smith’s areas of expertise include accident reconstruction, mechanical equipment evaluations, code and standards compliance, roofing system evaluations, and fires and explosions. He is a licensed Professional Engineer in Arkansas, Minnesota, Missouri, Oklahoma, Texas, and Wisconsin. He is a member of the American Society of Mechanical Engineers (ASME), Society of Automotive Engineers (SAE), and Pi Tau Sigma National Honor Society. Prior to joining Haag, Mr. Smith was a Petty Officer Second Class in the United States Navy. He trained at the Navy Nuclear Power Training Command Center in Orlando Florida and was stationed on the USS Arkansas (CGN-41), where he maintained reactor and steam plant chemistry, performed radiological controls, and operated mechanical equipment in the propulsion plant.

Any opinions expressed herein are those of the author(s) and do not necessarily reflect those of Haag Technical Services, Haag Engineering Co., Haag Education, or parent company, Haag Global, Inc.